A paradigm for cancer therapy

How is it possible that the various strategies and technologies used for cancer therapy still have such a high failure rate? One possible answer, which I believe is the most right, is that cancer biology is different from what is currently thought. Until a decade ago it was believed that the proliferative activity of differentiated cells underlies the cellular turnover in a human being. The research on stem cells, employing increasingly sophisticated technologies, has radically changed this belief.After birth, it is the activity of stem cells that controls the human body, both during growth and in the maintenance of the adult state. While there is a good knowledge of the activities of stem cells acting from the zygote stage until birth, much less is known about the activities of stem cells after birth. Thanks to the identification of stem cells, we now know that cells which are termed tissue- or organ-specific stem cells are at the basis of the capacity of various tissues to grow and undergo cell renewal. A stem cell is characterized by a different mode of replication from a differentiated cell. Stem cell replication results in one identical stem cell, which is called mother cell (self-renewal), and in one daughter cell with different biological characteristics, which gives rise to the differentiated cell of a given tissue. Because of this biological feature, “disease” can only arise from a stem cell that suffered “damage” and propagates such damage to the tissue. A profound change in the understanding of disease etiology follows from such a new way of conceiving disease, forcing the implementation of very different therapeutic strategies from those currently used. Such change in the way etiology is conceived inevitably applies to cancer disease, providing the foundations of a new paradigm for cancer therapy that was the subject matter of the last chapter: A therapeutic strategy conforming to a specific algorithm and adjusted according to the specific “behaviour” of a given cancer and the ensuing clinical response. 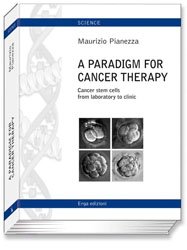 A paradigm for cancer therapy